Posted by Admin on Jul 25, 2018 6:00:00 PM
Financial advising requires a unique mix of traditional intelligence and emotional intelligence, according to Daniel Goleman, internationally known psychologist and best-selling author of Emotional Intelligence: Why it Can Matter More Than IQ. At the recent Investments & Wealth Institute Annual Conference Experience–ACE Nashville, Goleman said that to do your job successfully, you must not only understand the basic concepts that underlie the profession, but must have the emotional intelligence needed in order to truly succeed– or in other words, “what you know won’t matter as much as it should.” 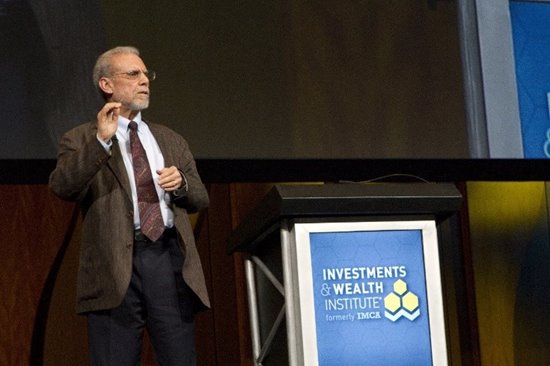 According to Goleman, that’s because at its core, financial advising is a business of relationships. Having a basic understanding of what’s happening inside your client’s head, and inside your own head, as well, can lead to more effective management and decision-making.

The problem Goleman sees is that intelligence is often valued highest, even when it doesn’t necessarily equate to job performance. To illustrate this point, he shared research he’d conducted on the ingredients of star performers in various industries. After writing the book, Emotional Intelligence, Goleman said, he asked companies to share with him their competence models. Developed in-part by Dr. Goleman’s former advisor, competence modeling evaluates star performers of a company and systematically compares them with average workers to assess which abilities, competencies, etc. are related to job performance.

What the data demonstrated is that IQ and technical skills, or the “threshold competency” for performing a job, were similar between both star performers and average workers, whereas emotional intelligence-based competencies made up the bulk of what delineates the two. Though there isn’t yet data to support this claim, Goleman suggests that it seems logical that financial advising is much the same.

“While technical competencies are important, if your clients don’t trust you, then you can’t advise them,” added Goleman.

Examining recent studies that expand our understanding of the brain can provide an example of why emotional intelligence is so important to the advising process. The prefrontal cortex is called the executive center of the brain and where information is taken in, understood, and used for maximal effect. In other words, it’s what financial advisers rely on to make informed decisions.

The problem is that the brain is designed to give privilege to the emotional centers of the brain, mainly, the amygdala, which is the trigger point for the fight, flight, or freeze response. Knowing this—and learning to recognize the signs of what’s referred to as an “amygdala hijack”— can prove incredibly useful.

Imagine an advisor brings up a particularly difficult subject with a client. Goleman suggests that a very possible response is that the client panics and their amygdala takes over. When this happens, it can easily jeopardize the conversation, as the amygdala only offers a sloppy picture of what’s going on. Known as the Yerkes—Dodson law, a psychological concept that has been studied extensively in sports, cognitive performance has been known to decline when too much cortisol is present in the bloodstream. Conversely, if cortisol is too low, engagement can wain and produce similarly lackluster results. For optimal effect, as an advisor, Goleman recommends that you and your client remain right in the middle–engaged, but not frightened.